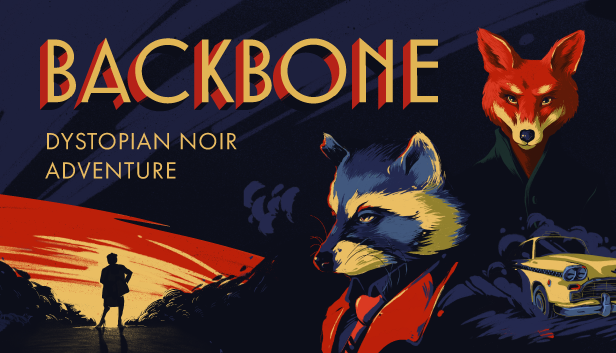 Backbone is a pixel art noir detective adventure. Step into the shoes of Howard Lotor, a raccoon private eye. Interrogate witnesses through branching dialogues inspired by classic CRPGs, sneak through diverse districts of a now walled-off dystopian Vancouver, sniff out clues, and choose which leads to follow.

Latest Updates from Our Project:

Backbone is inspired by film noir, retrofuturism, dystopian fiction, and modern Vancouver. Let's talk about these inspirations and how they'll play out in the final game.

Half of our team resides in Vancouver, while the other half is super jealous, because it's obviously the most beautiful city in the world.

Vancouver's Downtown is situated on the peninsula surrounded by ocean and snowy mountains. 200 rainy days per year and mild, coastal climate are excellent conditions for all sorts of crazy flora - flowers the size of an adult human, 10-meter trees, and sidewalks overgrown with lianas, ivy and moss. In Backbone, we'll combine noiresque rainy city with dark, saturated natural greens.

Backbone's Vancouver will feature 50-60s heritage buildings in deplorable condition, neighboring with high-class glassy skyscrapers. It's a multinational city of expats with densely populated China Town and Little India districts, and we will include this legacy in Backbone.

For the game, we will use the map and landmarks of modern Vancouver, dividing it into areas and zones suitable for various species of animals. For example, Stanley Park is used as a farmland, the coastal area is populated with fish farms, and the glassy spherical observatory Science World is the main research facility of the city.

Visually, film noir can be characterized by its very high-contrast picture that is further enhanced by the use of black and white film. Backbone visuals will include classic interplay of light and shadows, stark silhouettes illuminated by the night city, smoke and fog overlapping with neon, mirror-like rainy streets. Thematically, we're saying no to the sexist and overused stereotypes like femme-fatale and seasoned alcoholic detectives lacking empathy. It's important for us to tell a stylized, yet modern story, so instead we'll focus on corruption, social decay, banditism, poverty, discrimination and other themes still very much present in our own society.

Blade Runner really can't be categorized into one genre - it's a fascinating mixture of neo-noir, hardboiled, cyberpunk, and existentialism, and it has had great influence on every bit of media, gaming included. Backbone will feature the slow-burning suspense, existential dilemmas, blurred lines between good and evil, moral ambiguity, and the question of what it means to be human in the world without humanity.

If you've ever asked yourself "What would a TV set look like in 50s North American civilization of sentient animals?" - we got you covered. We're inspired by a vivid, nostalgic vision of the future present in masterpieces like 2001: A Space Odyssey, Fallout and Metropolis: the round, clean plastic lines, bright colors, analogue lamps and familiar 21st century technology reimagined in this fresh, exciting visual style. And it's not just style for the sake of it - every technological tool in Backbone would have its use, purpose and history.

The core of successful dystopian fiction is an uncanny resemblance to our present world - what would happen, if we, as a society, take just this small step in a wrong direction? What if we close our eyes for one moment and let the oppression and entropy take over? The best dystopias are the ones that could happen to us tomorrow. The interactivity of the game medium could really emphasize the terror one experiences in a dystopian society, and we're looking forward to making you feel all the things.

Let us know in the comments which elements of Backbone excite you the most!

Thank you for supporting our dream game. We're in a bit of a plateau now regarding funding, which is absolutely normal for 2-3rd weeks of Kickstarter campaigns, but every bit of reaching out to people really helps - so don't forget to tell your friends, family and loved ones about Backbone.

Great news - we have partnered up with Indiebox to bring you the physical edition of Backbone. It’s a beautiful box that includes a CD with the game + OST, a colorful Guidebook booklet, and a code to download the DRM-free version of the game.

To get this amazingness, simply increase your pledge by CA$45 (approx. US$35) and select it as an add-on in the survey we’re going to send to your e-mail address after the campaign is over. If you haven’t pledged yet - there is a new tier «The Officer» for the same price!

All prices for add-ons and tiers already include international shipping, so no worries about that.

Right now this is only for Win/Mac/Linux, but when we reach those sweet console stretch goals, we’ll definitely look into producing other physical editions.

We love raccoons. We also really love your Backbone fanart - it's the craziest feeling ever to see the characters from your brain reinvented by super talented people. Here's us sharing the best ones that are going to be published in Backbone Artbook!

If you feel like creating something like this - our messages and e-mail (hello@eggnut.com) are always open, and we'd love to feature your work in our book.

We'll be back soon for the next update talking all about our art process - from sketching, to pixel art, to setting up dynamic lighting and camerawork in UE4!

We're 62% funded and with 19 more days to go! Thank you very much for believing in us and supporting our dream.

"The Animal" tier which included the creation of your own NPC is all gone, so we were thinking abut introducing new rewards. Which in-game digital rewards would be the most interesting? Send us your ideas and we'll see if we can implement more ways you can influence the world of Backbone!

We also found a company to produce physical edition of the game, and we're looking at a price tag of 30USD / 40CAD for the production + international shipping. It will include a cute carton box, printed colorful guidebook, 2 CDs with the game and the OST, and a Steam/GOG code to get your digital download. We're also looking at noir raccoon detective plushies or vinyl figurines, pins, sticker sets, and other cute things. Let us know if this is something you'd like to grab!

After a deserved week off work, we're finally back to production! Backbone Demo we're currently working on will take you through 3 big locations and let you solve a blood-chilling case involving the underground criminal circles of the city. Start off the day in main character's apartment to learn more about what kind of a person he is, move on to Granville Street to question its inhabitants and crawl through its back alleys, and finally investigate the sketchy club with some stealth/action elements. About 50% of assets is done, but we'd like to polish the visuals and mechanics to the maximum before releasing it to the wider audience. So expect to start your investigation mid-summer 2018!

As usual, let us know in the comments what kind of rewards you're looking forward to, and if there are any questions about the game and the campaign. We're always here for you!

We're halfway there! Halfway more and Backbone will be released in 2019! Thank you so much for your support, please don't stop telling and sharing Backbone to your community, because we're pretty sure if you love detective noir stories about raccoons - your friends do too!